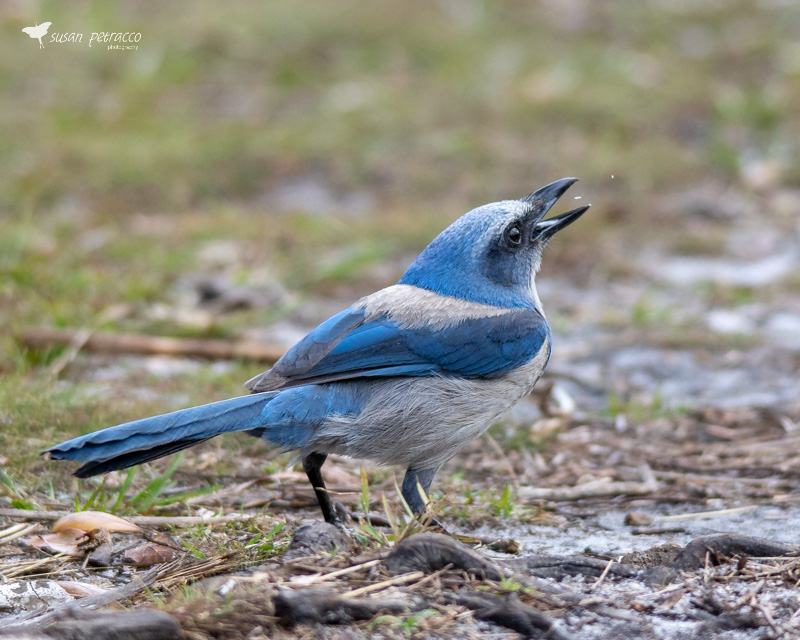 The Helen and Allan Cruickshank Sanctuary is located on Barnes Boulevard in Rockledge, Florida. It consists of 140 acres of pine flatwoods and scrub habitat.

The biggest attraction at this location is the large number of friendly Florida scrub jays resident on the property. This bird is only found in Florida, and it is listed as threatened due to habitat loss.

Do not feed the scrub jays!

Feeding them is illegal and had for their health. The great news is that you don’t need to feed them to draw them in. Just find a group of them, stand still, and hold up your hand and there’s a decent chance one will fly over and land on you. They also like to land on your head, so you might want to wear a hat.

There is a dirt hiking trail that winds around the western side of the Cruickshank sanctuary. At the parking lot off Barnes Boulevard, there’s a map showing the trail. It’s just over a mile long, and a very easy hike. There are no hills, and no water to cross except a small wet area where there is a bridge.

However, you will want to be careful of roots. There are lots of them and they can trip you if you aren’t careful. Especially if you’re looking at birds instead of looking where you’re going!

There is also a platform at the northeast corner of the loop. It’s not very tall, but it’s a great place to sit and rest and maybe get a slightly higher view of the property. While you’re there, you can also walk just a bit further north to where the wooden fence is. That’s the border of the property with the Chelsea Park subdivision. The other side of the fence has a lot more pine trees and can be a great place to see woodpeckers year around, and in the winter, sparrows and warblers.

If Cruickshank has recently undergone a prescribed burn, you may notice shorter vegetation and black, burned tree trunks. This is a good thing. Without prescribed burns, this property’s ecosystem would change. The scrub would turn into forest, and it would no longer support the scrub jays.

For more information on how fire helps ecosystems, I recommend the article Restoring Fire to Native Landscapes.

Off the Main Trail

There are also “trails” (I use that term lightly) that head east and aren’t marked on the map. I have walked there myself but I don’t do it often and never alone. I have been told there are sometimes homeless people in there, and I know there are coyotes! So I never go back there unless I’m with at least one other experienced hiker. I say this to warn you to take the same precautions.

Bird Species You May See

At first, Cruickshank may seem like a place you only go to see scrub jays. After all, that’s what it’s known for, and they’re definitely the most obvious. Especially when they’re in the mood to visit with humans! But Cruickshank is home to many more birds.

While you’re hiking around, keep an eye out for wood ducks. There used to be two mating pairs of wood ducks, but the most recent burn destroyed one of their favorite trees. Since they, I have seen one pair but not both. They do tend to be up high in the trees, even though they’re ducks. That’s something fairly unique about wood ducks, and I assume that’s how they got their name. They even nest in dead trees.

Woodpeckers are fairly common. On any given day there’s a great chance you’ll see a red-bellied woodpecker or two. Other species I see there regularly include pileated woodpeckers, downy woodpeckers, and yellow-shafted northern flickers.

Near the “crossroads” of the trail, there’s a flock of eastern towhees that hangs out. I hear them much more often than I see them, so learning what they sound like before you go can be helpful. But I have seen them on a handful of occasions.

I used to regularly see northern bobwhite on the property, but I haven’t seen or heard them in at least a year. They aren’t migratory, so I hope it’s only a coincidence.

If you look up in the sky, you’ll likely see raptors, including osprey, red-shouldered hawks, turkey vultures, and maybe a bald eagle. There are sometimes Cooper’s hawks in the sanctuary, and there’s a red-tailed hawk that hangs out on the power lines closer to the railroad tracks. (See warning above in “off the main trail” section.)

In the spring, both osprey and great horned owls usually nest on the western side of Cruickshank. Keep an eye on all of the osprey nests – they’re pretty easy to see. Great-horned owls reuse nests from other species, so you could see either one in the osprey nests.

Of course, you’ll often see common birds like blue-gray gnatcatchers, cardinals and mockingbirds, too. And during winter there are resident gray catbirds and yellow-rumped warblers. You can also find birds migrating through – I have seen cedar waxwings, American robins, chipping sparrows, and American redstarts.

There are also lots of eastern cottontail rabbits and gopher tortoises around. I also once saw some kind of mouse. I’m still on the lookout for snakes but I’ve never seen one here.

If you visit, please remember not to feed the birds, don’t litter, and don’t bring your pets.

Every so often we think we want to leave Florida,

Northern Cardinals are found across the eastern ha

Summer tanager bathing in the pond just before dus

This is a long-billed thrasher. Compare it to my l

I enjoyed learning how to identify long-billed and

What a morning! I took the dogs out for their morn

I haven’t been birding much except in the backya

I've never been so excited about such a crappy pho

At St. Mark's we found a number of red-cockaded wo